Falling in love with Frida

Falling in love with Frida is an intimate and enticing performance that explores the life, loves and legacy of painter Frida Kahlo (1907-1954).

It is a reclaiming of a disabled artist, a love like obsession, and an enquiry into how we shape what we are remembered for and how much can we really control others memories of us. It exposes many little-known facts about the infamous woman, remembered for her art. Where affinities and parallels are drawn, happy distractions are employed and a tale of ‘the great concealer’ is skillfully revealed by and through powerful yet fragile bodies.

I know you so well.

The clothes that hang inside your wardrobe,

I know where you sleep, the music you lay down to.

I’ve sat in your garden and at your table.

I know you left your mark on everything, including their hearts.

They all fell in love with you.

I’ve never met you, but I’ve done it too.

Falling in love with Frida is produced by Dance4. Commissioned by Dance4 and SICK! Festival.  Supported by Creative Scotland, Made in Scotland, Arts Council England and Fundays.

This piece premiered at Nottingham Lakeside Arts as part of NEAT Festival in May 2014.

And has been performed at: 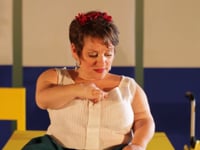